A rare opportunity to own a 1,000 ha property between Samara and Mount Camdeboo Private Game Reserves in the Eastern Cape. Situated in the heart of the protected environment known as the Mountain Zebra – Camdeboo Corridor and completely surrounded by the only two Big 5 game reserves in the Great Karoo, this is a perfect lifestyle getaway with the added potential for further development as a conservation property.

TOPOGRAPHY: The central valley floor is at an elevation of ± 870 m - 900 m ASL and is intersected by the meandering Melk River flowing in a south-westerly direction for 4 km through the property. The northern boundary is formed by cliffs at an elevation of ± 1,460 m ASL atop the south-facing lower mountain slopes of the Nardousberg mountain range. The southern boundary is formed by the top of the north-facing gradual slope of Mooiberg at an elevation of ± 1,300 m ASL. The gradient of the south-facing slopes varies from gradual to very steep at higher elevations and is bisected by two kloofs with adjoining low dolerite ridges that intrude into the Melk River valley.

• North-facing Slopes. This sweeter portion of the property shows signs of historical overgrazing and is mostly covered by pioneer grasses interspersed with Jacket Plum (Pappea capensis), Shepherd’s Tree (Boscia oleoides) and other larger shrubs like Wild Pomegranate (Rhigozum obovatum) and Cross-berry (Grewia occidentalis With proactive management Spekboom (Portulacaria Afra) could be encouraged to repopulate this slope.

• South-facing Slopes & Kloofs – Cooler with steeper slopes and dominated by Blinkblaar, Renosterbos, Spikethorn, Kapokbos, and Cabbage Trees with some Wild Olive and Camdeboo Stinkwood along the watercourses.

24 Photo(s)
4 BED &#43; HOUSE PLUS SMALLHOLDING ON THE EDGE OF THE SUNDAYS RIVER WITH SOUGHT AFTER NORTH VIEWS
R 1,295,000
Country lovers do not miss this one. On Offer is a 4+ Bedroom farmhouse, all large with basins that has a Lovely Kitchen, Lounge with Fireplace, dining room, Study, and two large bedrooms. The abundant land area of 1,8 ha is located on Sunday's riverbank and is fenced on all sides. There is a borehole that fills a reservoir as well as rainwater harvest tanks, two garages, workshop, a double carport, and various storage buildings. There is also a built braai and mostly finished entertainment area (man-cave) leading to the nicely established front garden. Its unique value is the sought-after North views of Spandaukop. The land is sufficient to it grow food or subdivide it into specially appointed smaller properties with stunning views. Currently the lucerne, pepper trees and others all give a positive atmosphere of green. At the current asking price I believe it would be almost impossible to replace. I expect it will be snapped up.Property Reference #: RL5525Agent Details:Ken TaytasacAgrisell Pty Ltd9A Kerk StreetPiketberg7320... 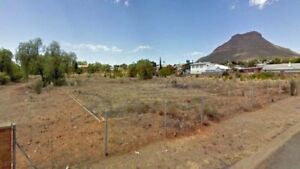 4 Photo(s)
Land Land For Sale in Graaff Reinet Eastern Cape
R 1,595,000
The property on offer is situated in Graaff Reinet – Eastern Cape Graaff Reinet is a well-known tourists destination and is the fourth oldest town in South Africa. This 1.115 ha vacant stand is perfectly located and is zoned for residential 3 use which means the development prospects are almost endless. For example, there is a high demand in the town for a retirement village, security or a lifestyle estate or a townhouse complex. All the relevant documentation can be furnished by a Myroof.co.za consultant.The municipal utilities on the stand currently are; There is a sewerage pipe connection on site. There is a storm water pipe connection on site. There is access to a fresh water line on the boundary. Electricity in not available as a transformer would be needed. To view more details, photos and floor plans for this property please go to https://www.myroof.co.za/MR104701Property Reference #: MR104701Agent Details:MyRoof PropertiesMyRoof.co.za373 Timothy Street, Waterkloof Glen, Pretoria 01818am-5pm Mon-Fri...
View More
Back To Search
Gumtree Safety Tips
1.Meet in a public space to see the item and exchange money.
2.Never send your item before receiving the money.
3.Never send or wire money to sellers or buyers.
Read More
Looking to Sell?
Whether you are selling your car, old cell phone or laptop, learn how much your item could be worth with our Gumtree Pricing Guide.
Read More
Suggested
Popular
Get to Know Us
About Gumtree
Rules for Posting Ads
Gumtree Blog
Gumtree for Business
Explore
Best Ads
Gumtree Content
Locations
Adevinta Brands
Mobile App
Legal Bits
Terms of Use
Privacy Policy
Cookie Notice
Tips & Help
Help & Contact Us
Stay Safe
Gumtree Motors
Cars A-C
Cars D-G
Cars H-L
Cars M-O
Cars P-Z